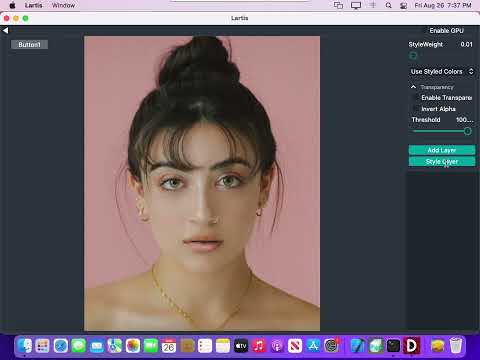 First off - sorry about ‘Button 1’ - I made this on a whim, that’s a temporary testing button

I just tested out my project on an Amazon Mac M1 (for the hell of it) that’s 3,600 miles away from me - the screen refresh rate is not exactly representative as a result (I think it’s measures in seconds per frame rather than fps)…

This is Python4Delphi with PythonEnvironments, Lightweight Python Wrappers and P4D Data Sciences all helped along with a little Skia shader magic.

The front end is Delphi FMX tied to a Python backend that performs image styling (and training) usiing Fast Neural Styling via PyTorch.

The results are rather slow ATM as I’ve yet to enable the M1’s GPU (simple enough to do).

My Windows Laptop does the same thing almost instantly (I’ve got a 3060 in it which helps a lot). Enabling the M1’s GPU will make the above take far less time - I’d guess it’ll be under a second (it’s a crappy little Mac Mini - not exactly a powerhouse).

A prevoius TRAINING test revealed that a Mac takes 10 hours to produce a style while my 3060 takes 1 hour 45 mins and a 3080 (actually an A10G - which is about the same speed, possibly faster) takes 45 mins.